Hi everyone !
I wasn't planning on posting today, because I did a long post yesterday & I'm finishing taking my school supplies haul photo's & a make-up tutorial, etc. , but I wanted to post today because I wanted to thank you's for one or two things.

Today I wore a pretty, but casual with an edge sort of outfit today, because I went to the cinema with my mam & brother & I wasn't in the mood to wear leggings. 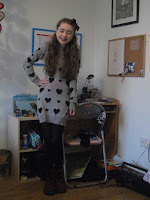 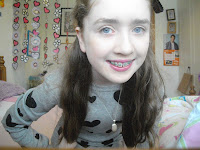 Sorry for the bad quality of the photo's above !
If you follow me on Twitter @daintysprinkles you'll know that we are having stormy weather here in Ireland today.
And that brings me on to my next bit of news which is a big THANK YOU !!!!!!
I woke up this morning & went on my laptop to find that Dainty Sprinkles have 40 followers !
Ok like some of you's with 1,040 followers may find that pretty pathetic that I'm thanking you's for that, but I've been blogging on different blogs for two years now & I've never got followers let alone 40 followers like seriously - 40 followers ?! I'm soo happy soo thank you everyone who reads, Follows or comments on my blog - It really makes my day :)).

Also,  The other day I found out that Dainty Sprinkles is on the nominations list for Best Youth Blog on the Irish Blog Awards.
I don't know how many nominations, etc. you need to have to be nominated, but anyhow thank you soo much for the nomination. Besides the two class blogs, I am the youngest blogger in that category & I'm really happy & excited that I was nominated soo thank you again !