Hi everyone !
You's might have noticed that it's been three weeks since I've done an outfit of the day & that is because the weathers been acting all wintery and october-y soo I decided to do an Autumn & Winter outfit post ! 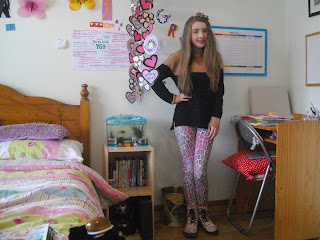 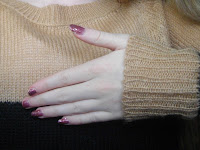 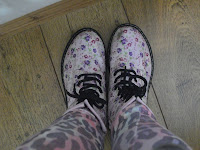 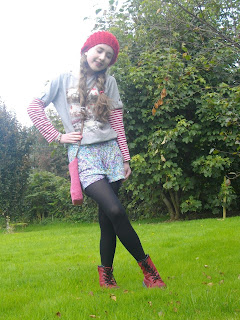 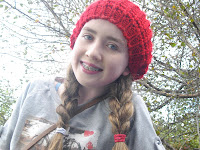 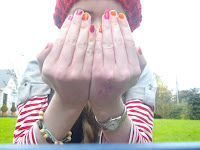 My second outfit is a bit less laid back, but at the same time I don't think it's too dressy or anything.
~ Jumper from Penneys
~ Floral jumpsuit worn underneath from H&M
~ Red hat from Dunnes Stores
~ Red leopard print boots from Dunnes Stores
~ Tights from F&F @ Tesco
~ Handbag used to be my Mam soo you'd have to ask her ! 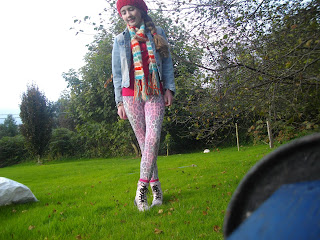 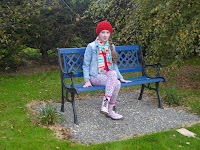 My third outfit is pretty wintery, because I wore it during the evening last Sunday when we were working on the rabbits' autumn photoshoot !
~ Denim jacket from Dunnes Stores
~ Red top, Leggings are both from Penneys
~  Floral boots, Red hat both from Dunnes Stores

~  Scarf  and socks worn underneath boots from Penneys 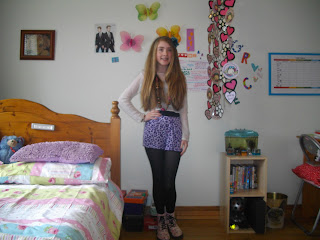 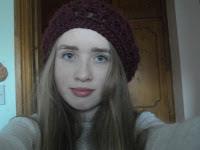 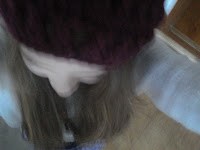 My last outfit, I wore yesterday & I'm really sorry the photos' aren't great, because just as I took the photo of my outfit my friend arrived & I'd only just got dressed and I forgot to take a photo of my hat soo I took a photo when I got home yesterday evening.
My outfit has a bit of ladylikeness in it, but it has winter colours in it mainly !
~ White cardigan worn back to front
~ Purple leopard print shorts from Penneys
~ Navy tank top, Burgandy hat both from Dunnes Stores
~ Tights from F&F @ Tesco
~ Turquoise rose hairband from Pulse Accessories
~ Floral boots from Dunnes Stores
~ Necklace from Penneys.

They're my autumn & winter outfits, I hope you like them :)).
I'm off to do some tutorials for Hallowe'en make-up yayy - Keep an eye out for the rabbits' autumn photoshoot being uploaded soon !