T.Y Thursdays #5 : Workshops, Team Building and Being a Social Butterfly !

Okay, maybe not such a social butterfly.
I tried.

Today's post is on my week of workshops - all together now, "It has not been a week !" It has.
When I think of it, the group I'm in (Group four !) have been quite lucky as we've had a week of workshops together before we head off to Galway so we've all got to know at least a few people we mightn't have known too well before last Thursday.
Today (it's a Friday, but I may keep the 'Thursday title.) we have the day off to prepare and since my suitcase is already packed, I plan on spending the day admiring the heaps of food on it and finishing this blopost.

Productivity at it's finest.

I'm presuming everyone in my group had similar thoughts because each group had a leader and our's gave us individual tasks to do (i.e working on our own, not with each other.) and mine was building a tower. Problem was that there were two towers to make and the instruction papers are deliberately unclear so two or three of us ended up having to work together in order to make the two towers. I felt like I knew something for once as I remembered my brother making all sorts of things out of K'nex years ago so I was flying it - until I had put a whole load of pieces the wrong was around and someone in my group had to fix it so I was like ha ha awkward for me. Teamwork went seriously well, I couldn't believe that not only had I properly participated, but I also hadn't bitten anyone's heads off so when all the groups put the bridge together, I felt like a proud parent or something except there were like thirty other parents too. There was a group picture taken except it isn't anywhere online so we'll just pretend it's here.

That afternoon, we played Gold of the Desert Kings in groups. The objective was basically to get back to base camp but you need to survive sandstorms and heat as well as other obstacles such as running out of food and water. To win the game, you need to bring back the most gold from the mountains and out of five groups, three died and the group I was in, came in second place ! The Eagle's Flight was unexpectedly my favourite workshop since it helped with communicating and teamwork, etc. .

On the second day of workshops, we had slam poetry ! I think that a lot of people were expecting it to be boring, but in fact it was the complete opposite and everyone had a whale of a time. The poet who ran the workshop is Stephen Murray and he was hilarious and very inspiring. Throughout the day in the run up to writing our own poems, we were given exercises such as describing what you would do to someone you hate, describing what you don't like about yourself and completing five sentences beginning with "I am ...". These all really helped when thinking of an idea for a poem at the end of the day and from what I saw anyway, it encouraged everyone to write down their feelings, putting them into words which can be extremely difficult at times. I wrote my poem about my experiences of meltdowns and panic attacks and you can read it here.  The workshop was such a brilliant experience and gave us all a new perspective on poetry. 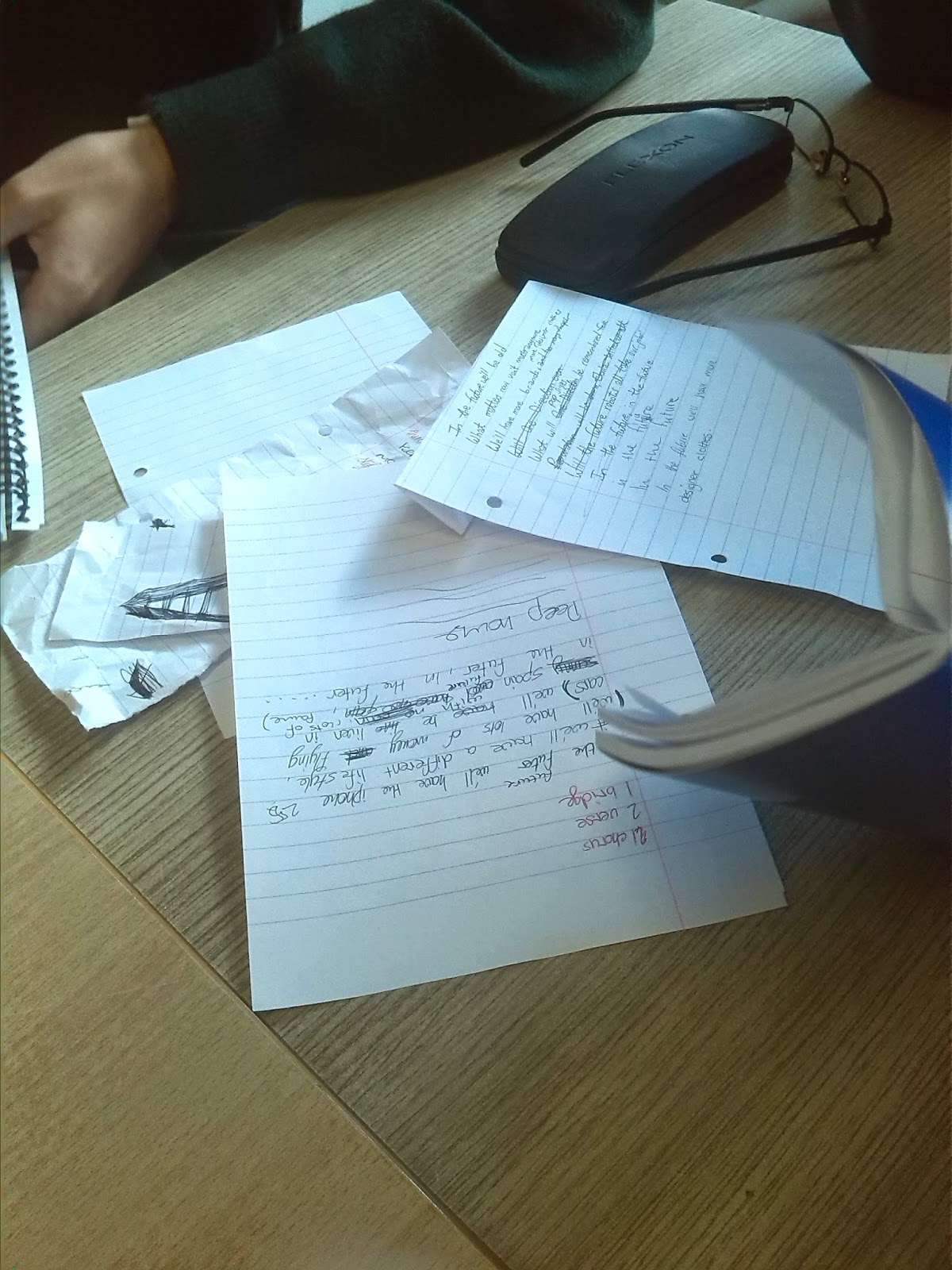 On Monday and Tuesday, we had SongSchool where we were put into smaller groups again in which we wrote and recorded a song ! Our group had no idea what to write and ended up resorting to writing down our interests and then my blog was mentioned to be put down and I was just like 'please don't' and then the phrase 'teenage mutant ninja bloggers' was said but luckily, after this we came up with a decent theme - the future ! Fast forward a day later and we have a cheesy but catchy song about the future with 'deep house' music during the bridge - I was fascinated by the GarageBand app that was used to layer and place the music together. Day two was much more funner than day one - mainly because we spent most of the day either recording or screaming along to Wonderwall and basically any well known song with guitar in the background. At the end of the day, a podcast was made and we all got to hear every group's songs which we all couldn't stop laughing at ! Then members of each group were asked questions about their song for the podcast quote "What was your favourite part of the song ? The middle" .

On Wednesday, we had Law and like poetry, it was the complete opposite to what everyone expected. The barrister running the workshop taught us all about the different areas of law and civil law cases which often turned out to be a bit humorous ! We also did a bit of role play and I volunteered to be one of the witnesses in this and made a twat of myself as usual by dropping the constitution book before I had even started. 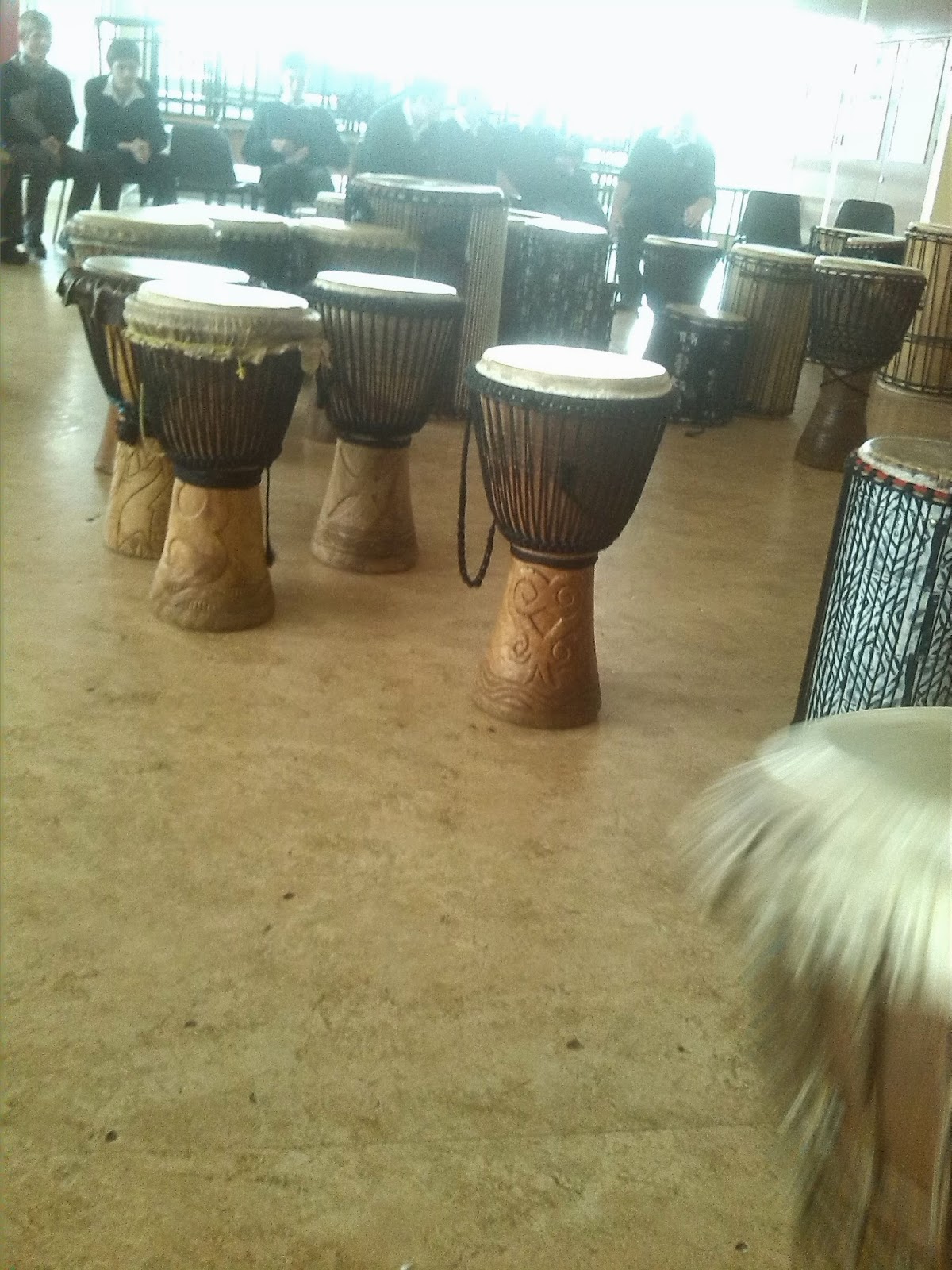 Yesterday was our last day of workshops before Galway ! In Wassa Wassa we first learned lots about African Culture and Ireland's stereotypical view of it. In the morning, we played the drums and learned different rhythms, etc. which I seriously enjoyed because I love tapping along to the beat of songs and drums are just brilliant because they're almost like the glue of a song - they put it together ! Ramblings aside, that was brilliant until I was in a daze doing a rhythm like everyone else when I started getting strange looks and someone says "Grace, it's your turn to do a solo". Eh, what solo ? Turns out we were all doing solo improvisation things and I had no idea.
*taps drums randomly to get it over and done with and to pretend I wasn't previously zoned out*

After break, we did the wassa wassa dancing which was hilarious ! We looked like some kind of orangutans, bent over waving our hands in the air. I didn't mind doing it because we were all going to make twats out of ourselves anyway and I tend to just laugh at myself in these situations because my dancing skills are on par with my maths skills. They rarely exist.  We also did some kind of response singing and we were supposed to yell something like "My-yom-by" except half the lads were shouting "Hyundai" so I ended up *maturely* doing that because it's easier to remember. Group One also had Wassa Wassa so while they did the dancing we played the drums and while we did the dancing they played the drums. I could barely concentrate on what I was doing, I was laughing so much at my friends from group one dancing.

I enjoyed every workshop so much and it's been a great opportunity to get to know others in the group. I'm slightly disappointed as I didn't take as many photos as I'd hoped to, so I'll be making up for that this weekend ! The weird thing about this month is that most of the time there are 2-3 groups either away at the rugby club or in Galway so lunchtime is very quiet !