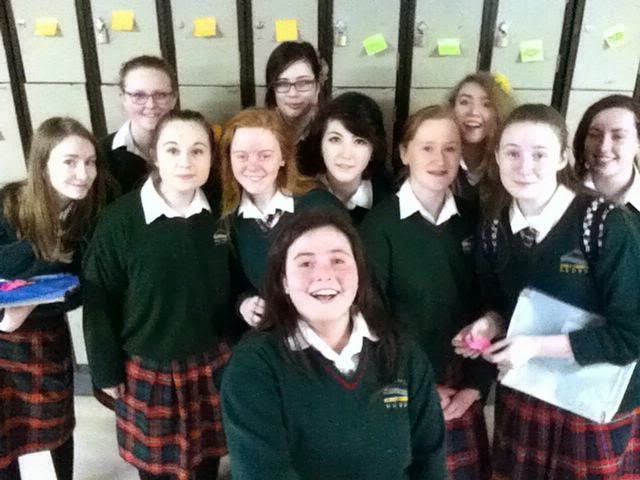 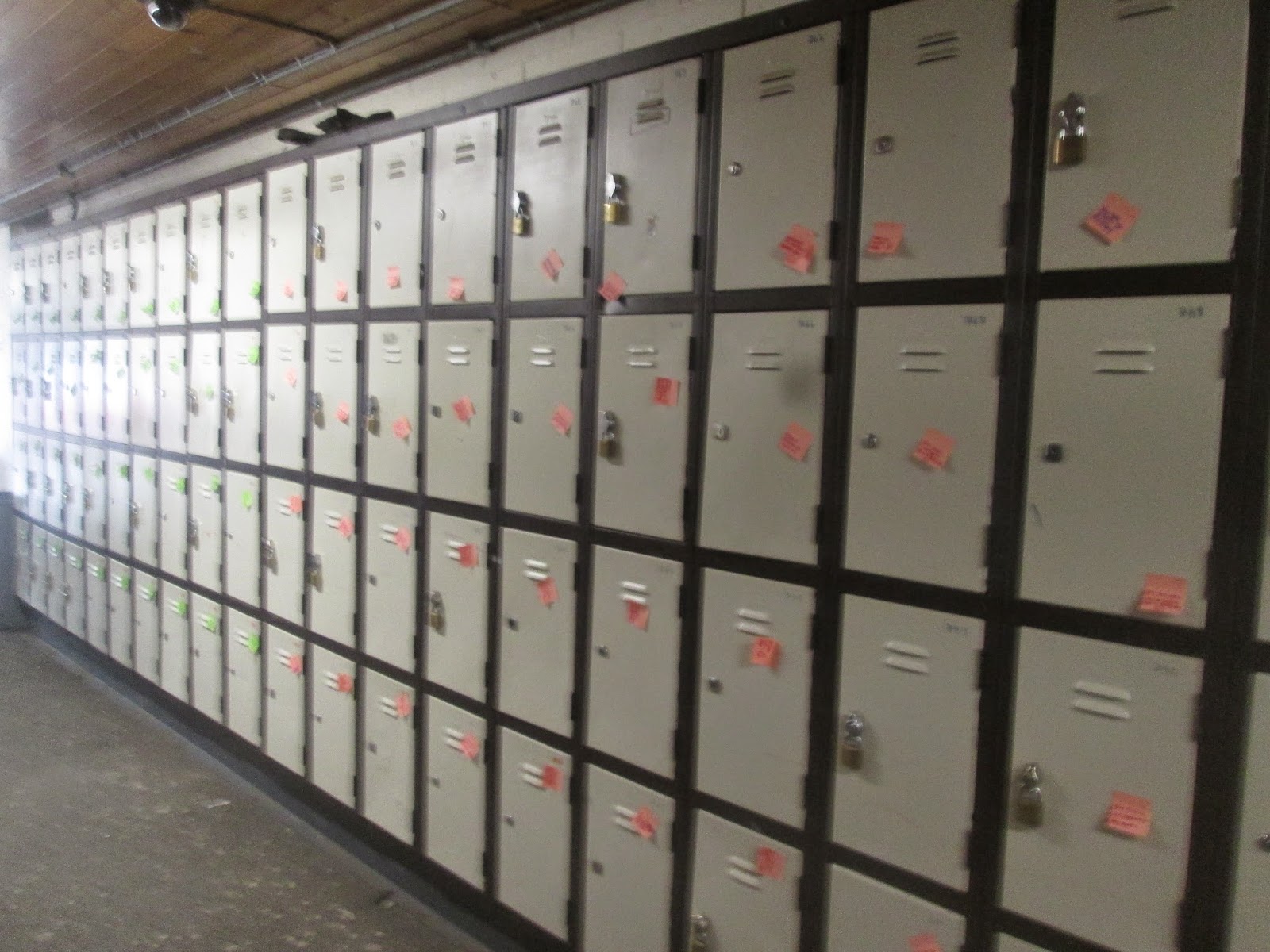 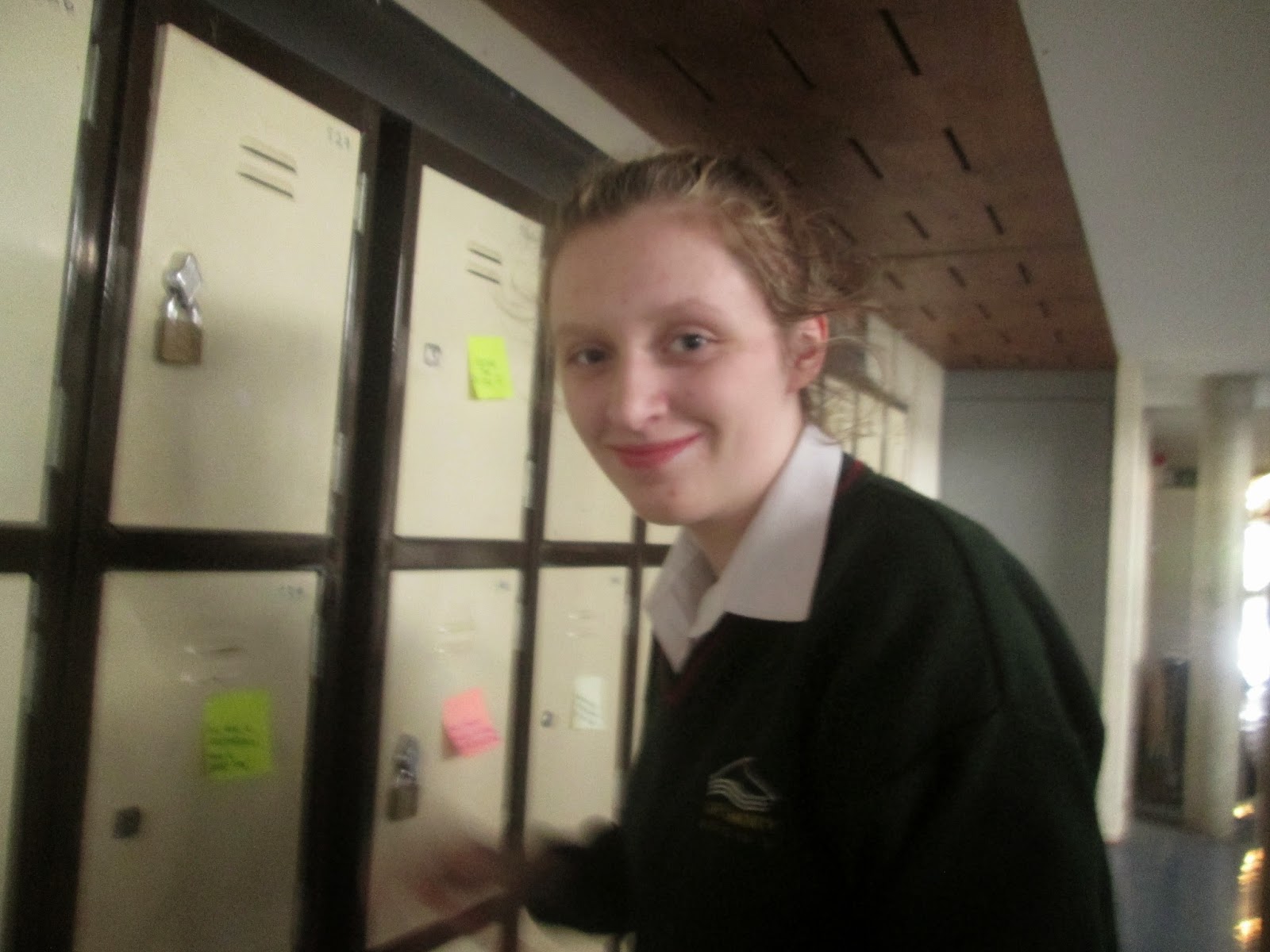 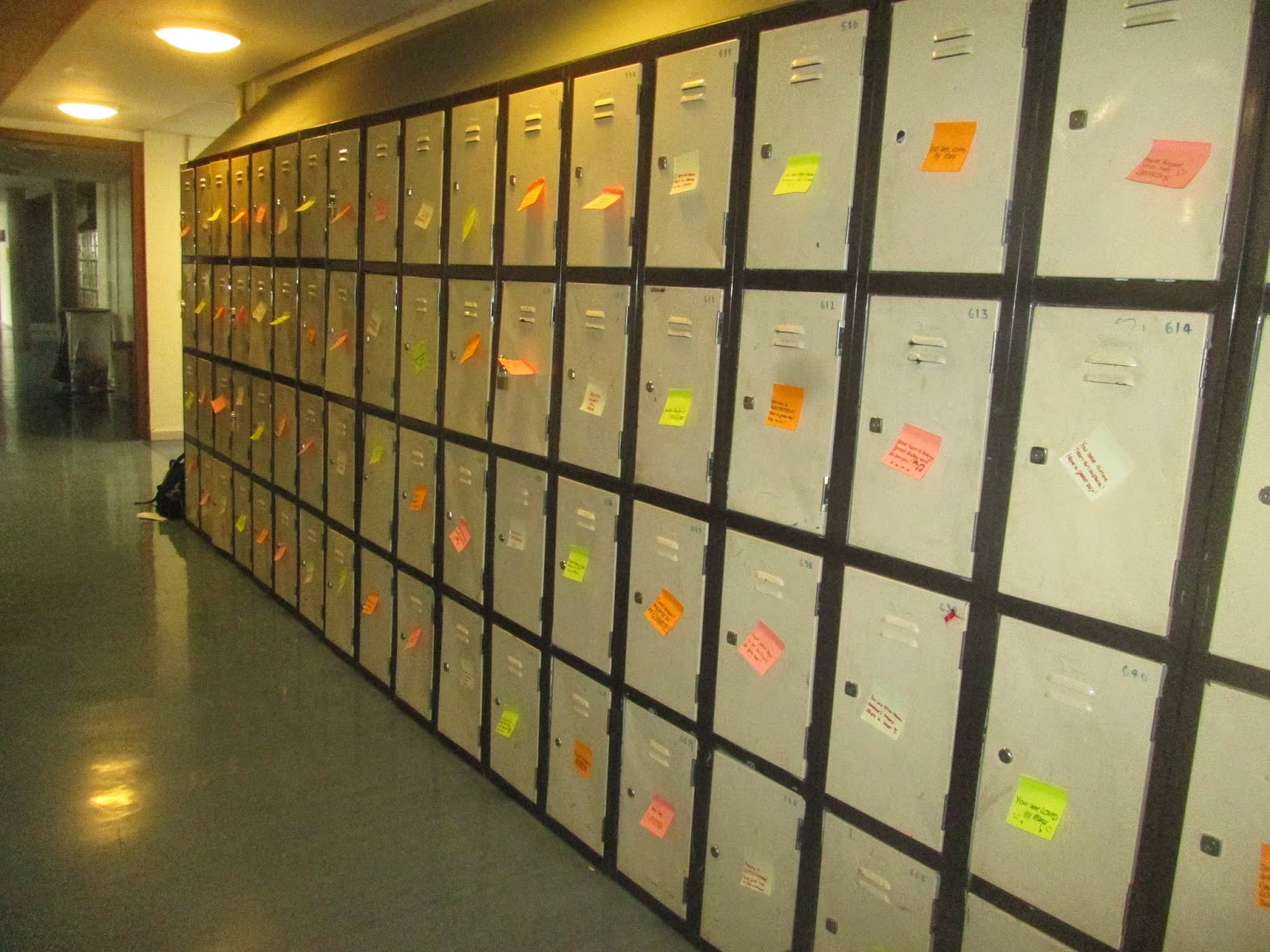 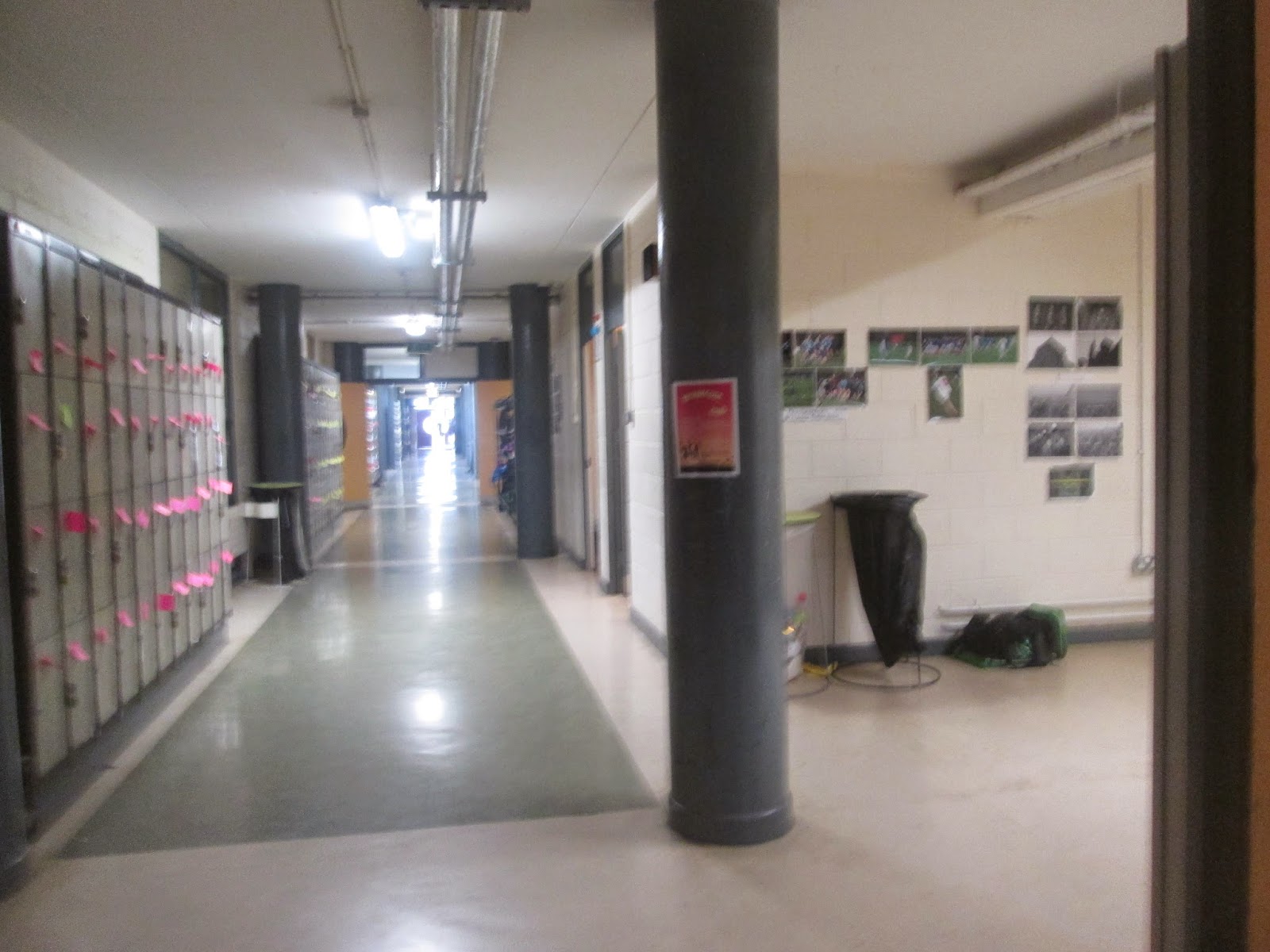 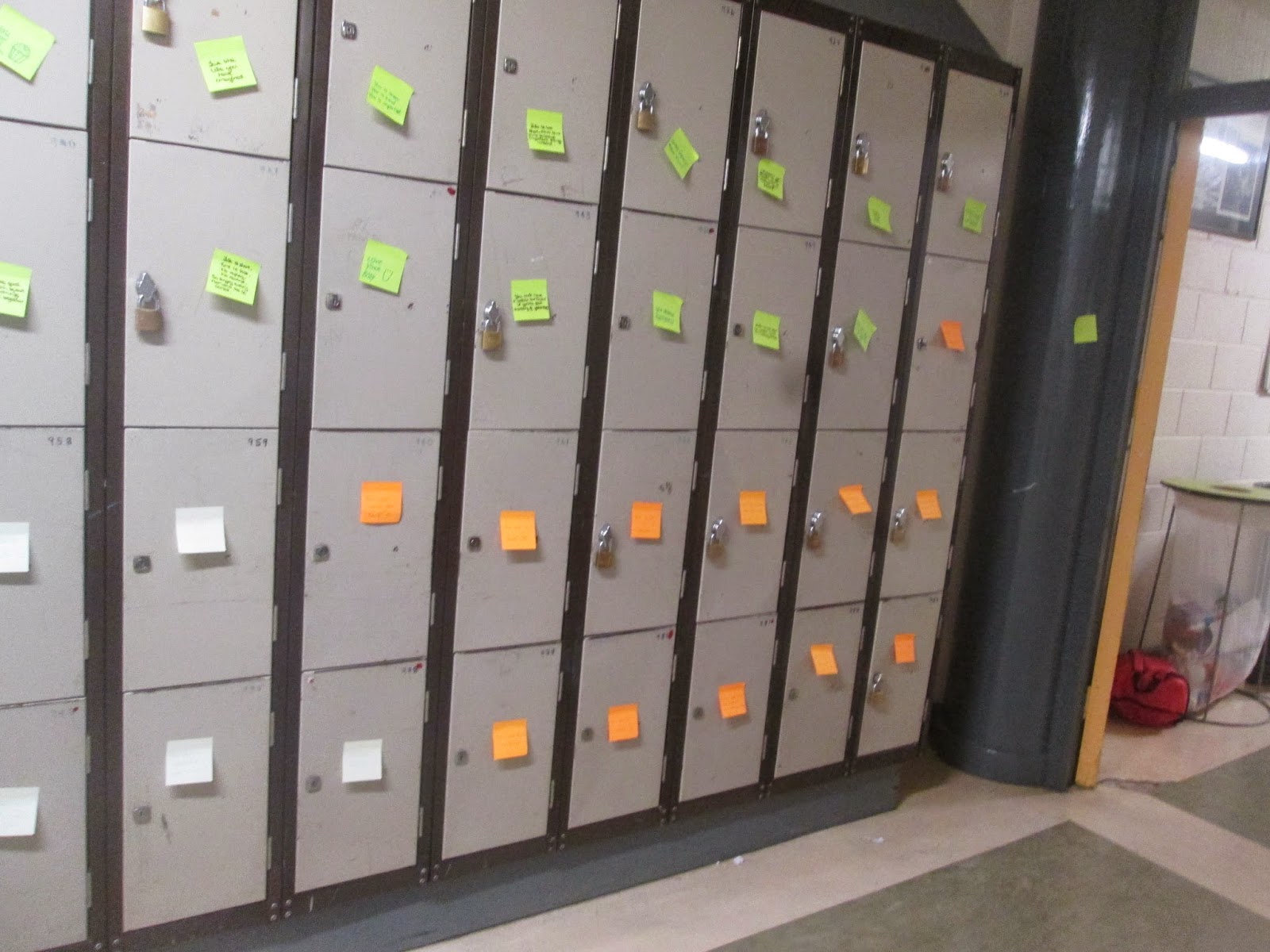 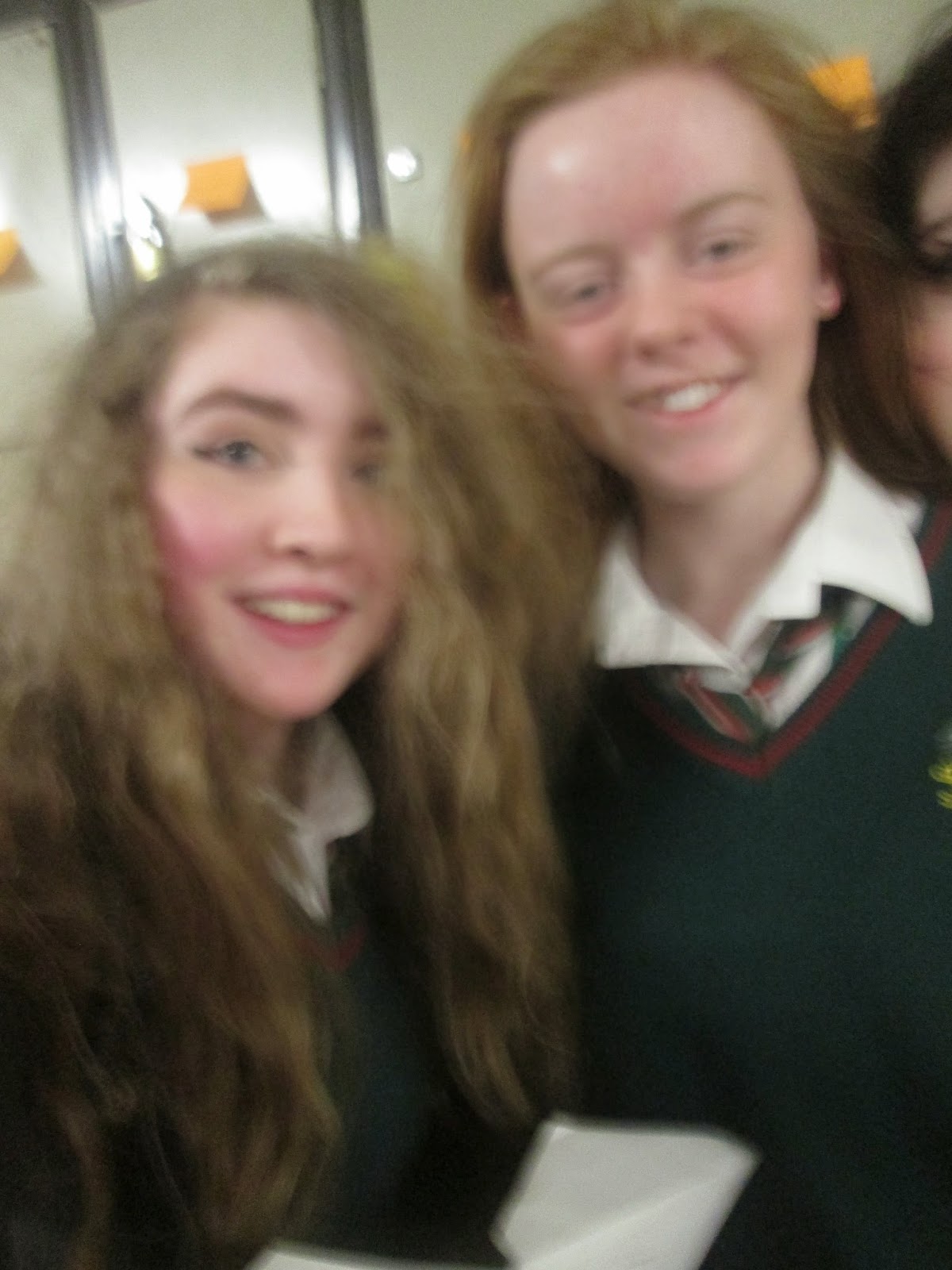 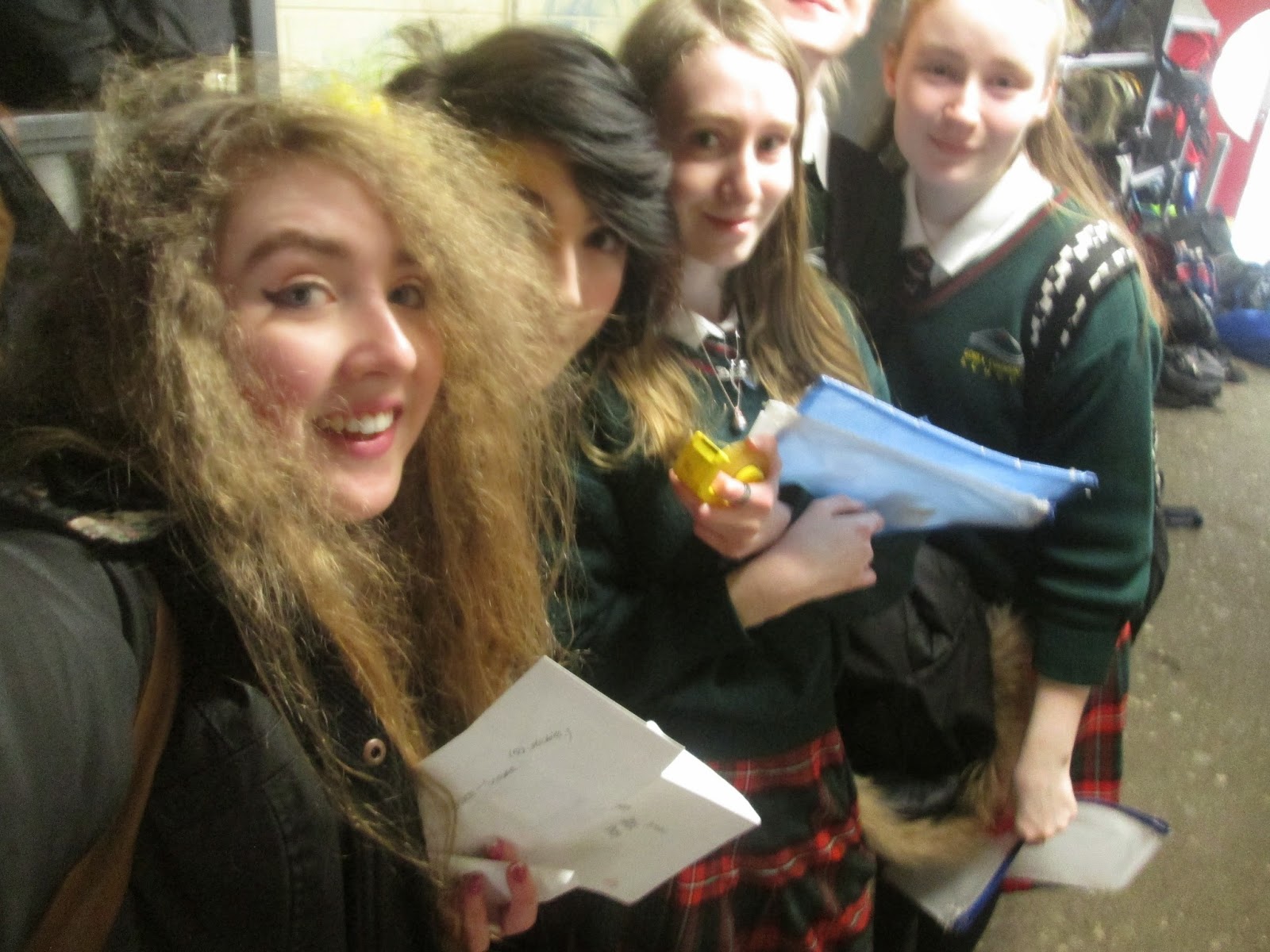 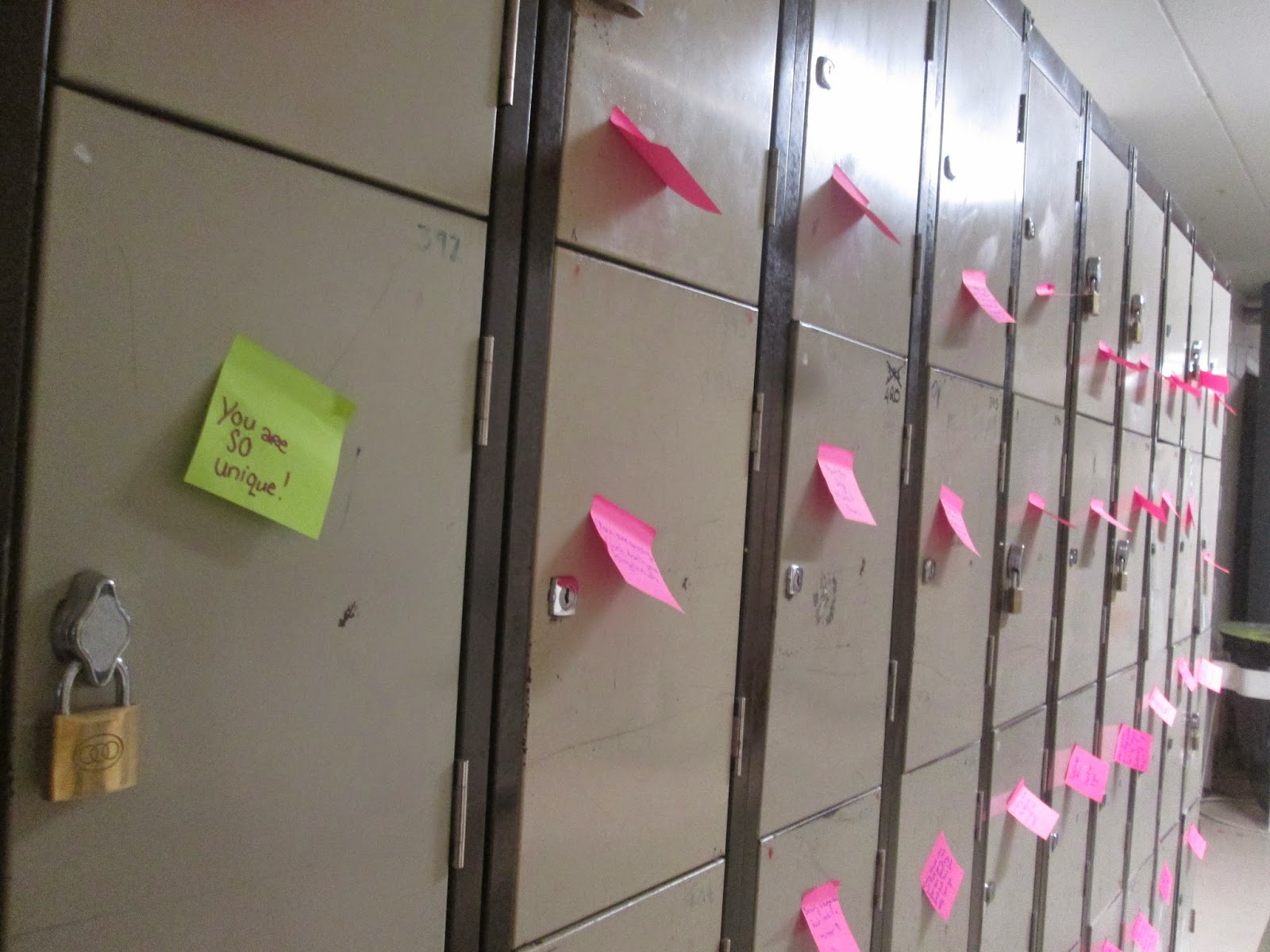 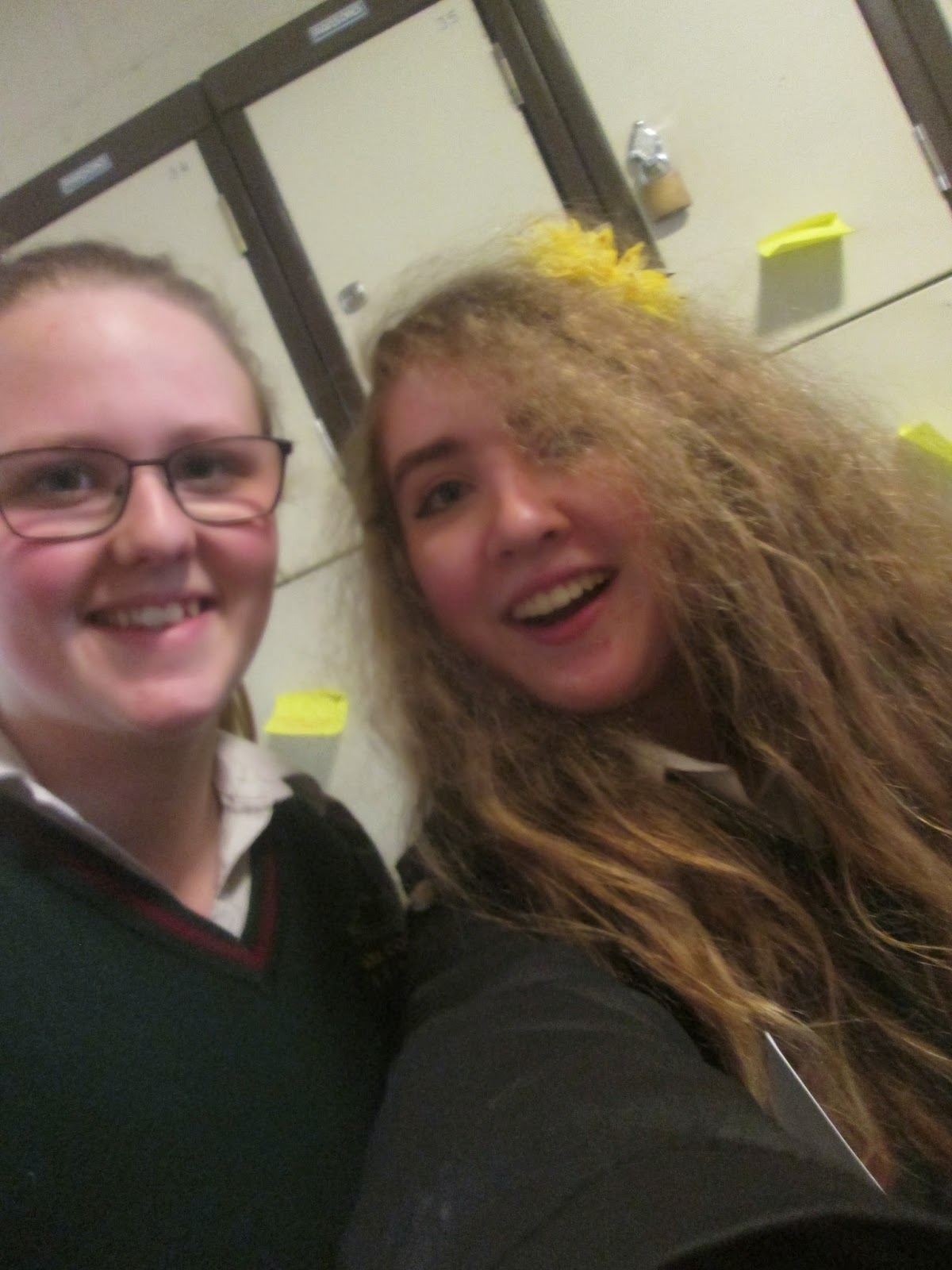 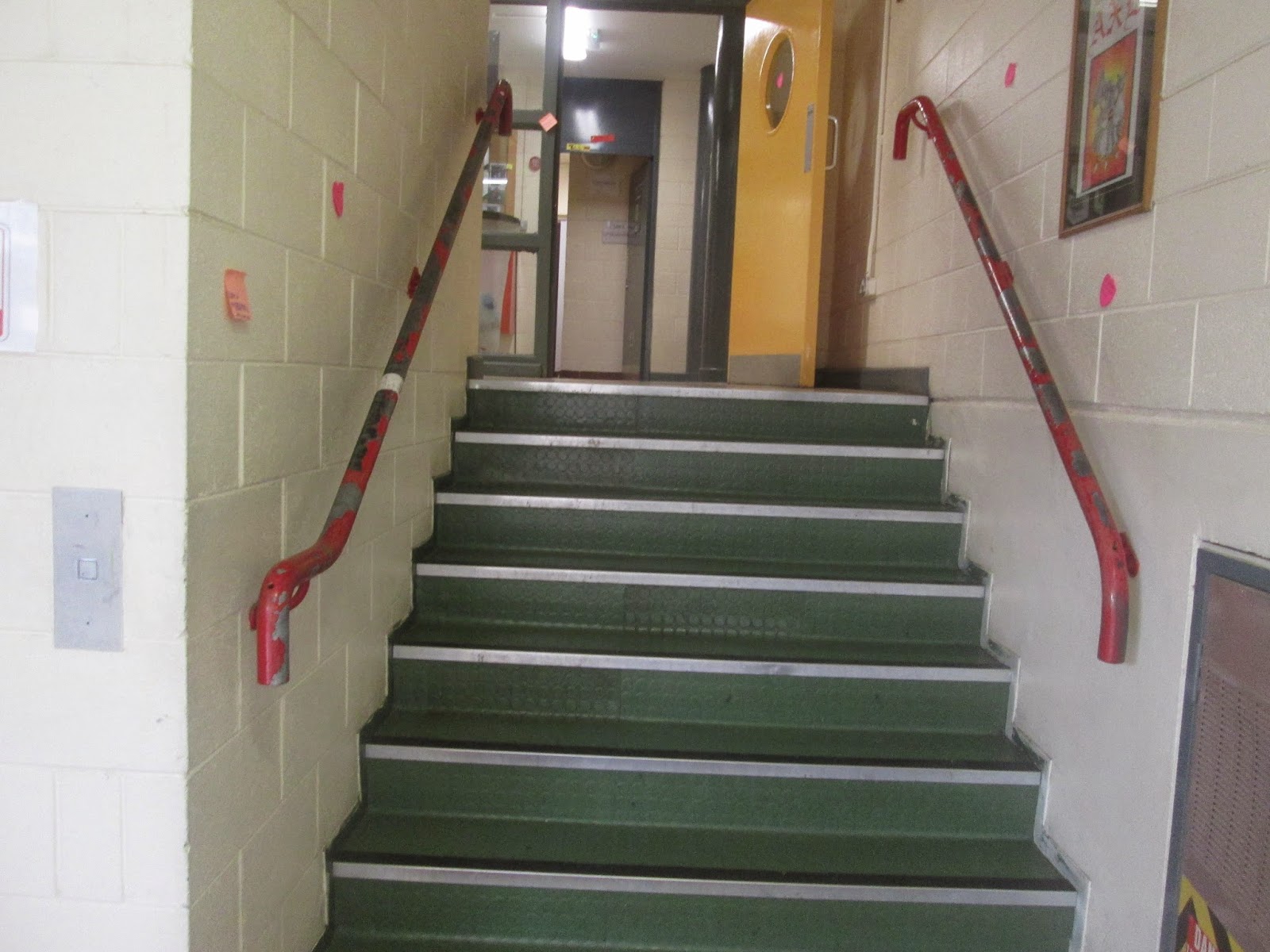 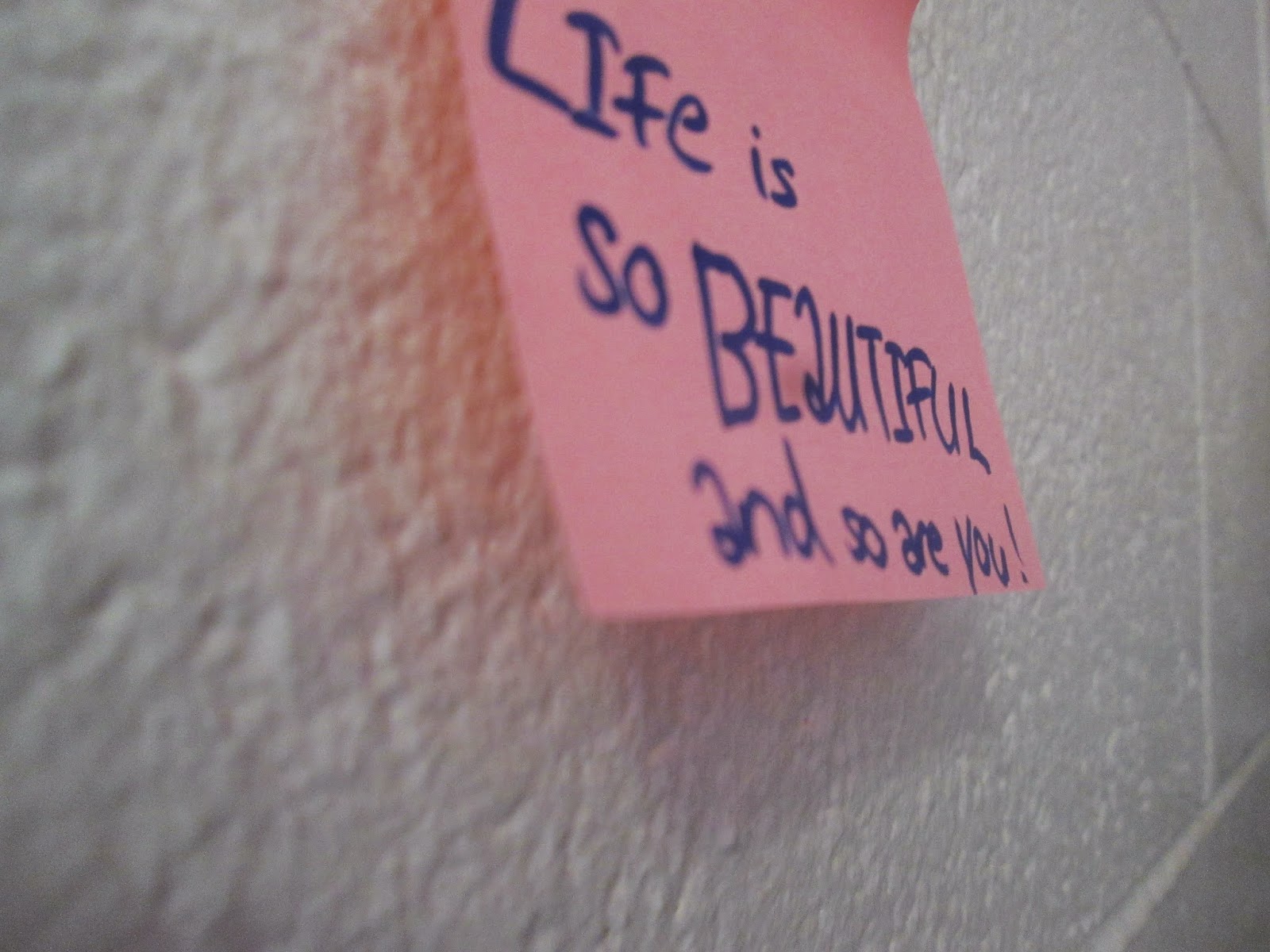 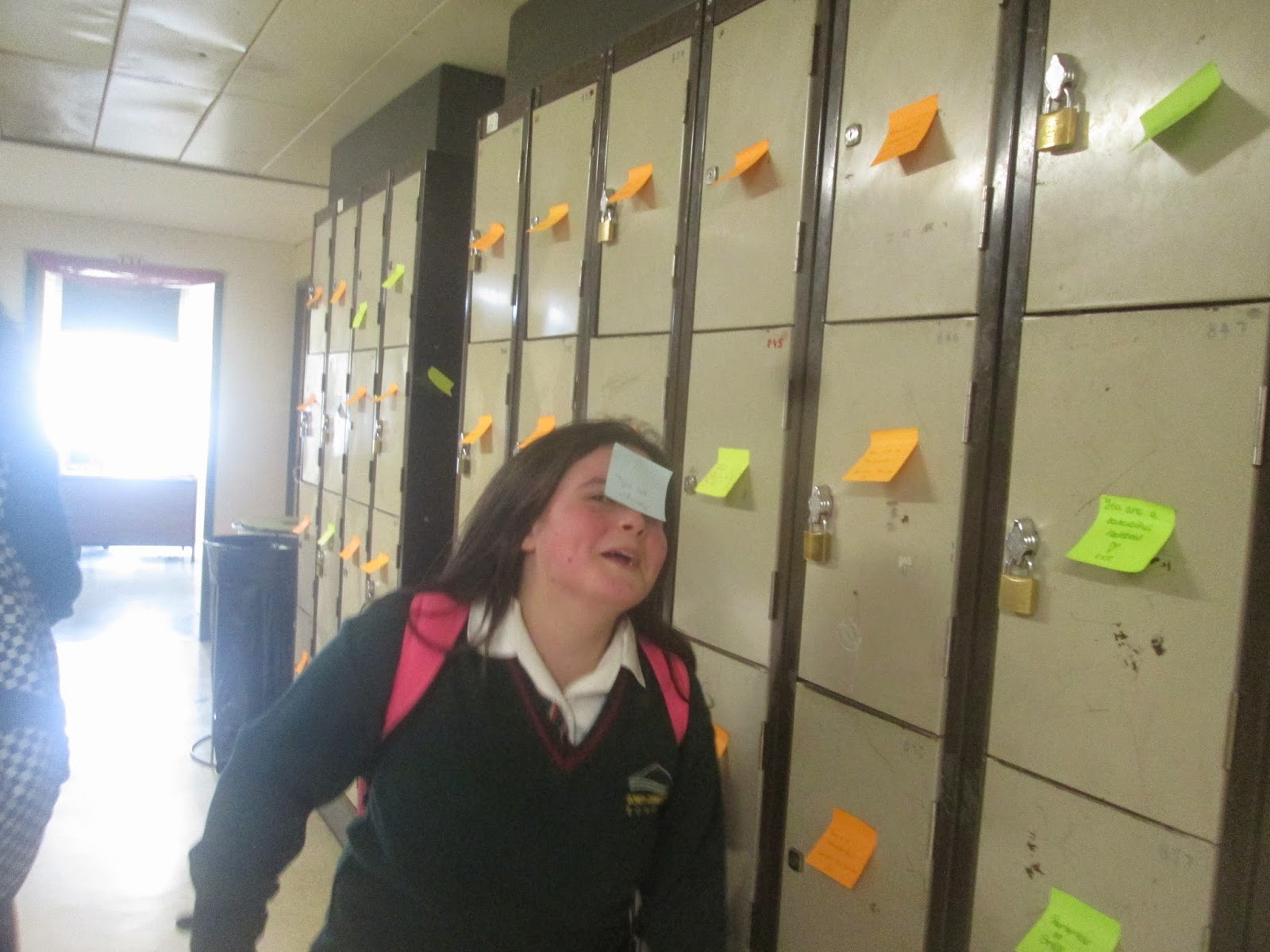 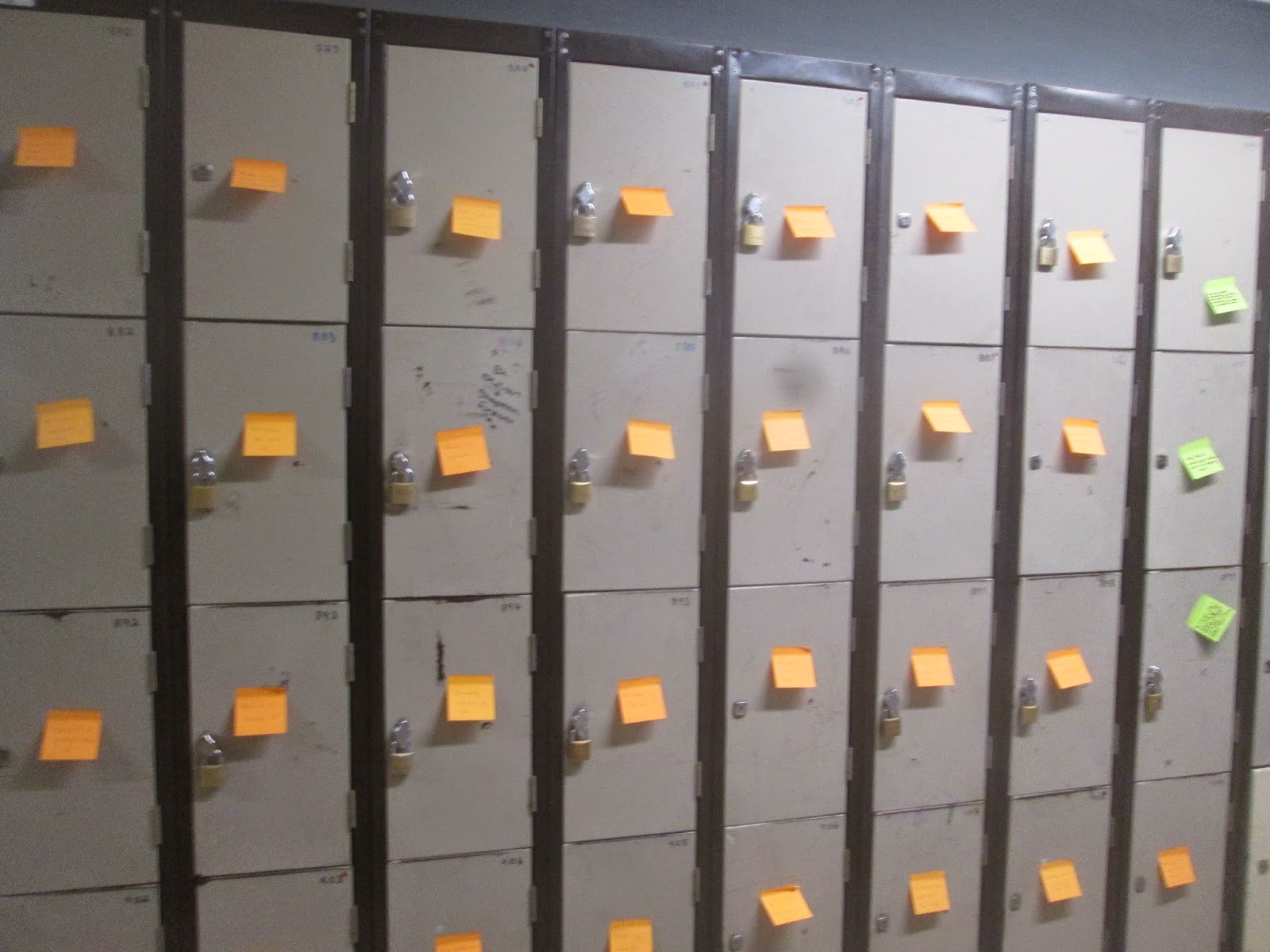 Wednesday evening two weeks ago, I found an article on the Internet from several months back where a Canadian girl had stuck up post it notes with positive messages written on them all around her school and I loved the idea so much that I really wanted to try it out myself but knowing how large our school is and how early people arrive in during the mornings, I knew it would be impossible to do it on my own so I messaged my friend and we put together a list of seven other names and they were all immediately on for the plan. The next morning, three of us brought a poster which I had made to explain the project to our year head and principal who both loved the idea, resulting in us not only being given permission to carry out the project but also to miss period three on Friday of the following week !

Seven of us met at my house on Friday to begin work on sorting out a rota of which areas we were going to do and of course, writing up the stickies. Although we only wrote up around 300 between us, the afternoon was a success since everyone either brought sticky notes or stationary and I had also written up quotes on a word document in advance so we were able to start immediately. The project did end up consisting of a lot more work than my slightly naive self had anticipated ! We wanted to put a sticky note on every locker in the school and maybe the bathroom mirrors if we had spares so we needed to write up at least 1700 sticky notes in five days and stick them up in less that forty minutes. We asked three more of our friends to help us and I was so thankful they agreed at short notice and I was surprised that everyone I asked from the beginning to two days before, were more than delighted to get involved and it was just amazing ! As much as the build up was exciting, it was also nerve-raking and draining . Everyday we were counting and recounting locker numbers - poor Laura almost fainted when she heard there were 500 lockers in Area Three -  and writing the stickies up - I could be found writing them up at 1am, half my friends could be seen multitasking writing them and finishing portfolio all afternoon and we could be spotted writing them up on the bus home from the UCD trip ! It had to be kept an entire secret and extremely quiet in order for the project to work properly and somehow we managed to keep it from every one of our classmates !

When Friday came around, we were all very excited but stressed since we still weren't one hundred percent sure whether or not we had enough stickies on us. At 10.20am, the bell finally rang and we darted for it ! There were about three people both of the largest areas and one or two on the rest, the plan being to help out in other areas when you were finished. I really didn't care at this stage who saw me sticking them up as I didn't think we'd be finished by 11am so I began as soon as I reached my first area ! Immediately, teachers and students in other years on their way to class were asking what was happening and saying how they thought it was a great idea which was a brilliant start ! I had placed myself on the rota for three areas and was running everywhere, dropping my camera everywhere, thinking I was running out of time when I realised how many spares I had left ! I suddenly found myself finishing up on the PE lockers and running to Area Five to help Bronwyn when on the way, I bumped into Liane and Mary who were going the same way telling me that almost every area was finished ! I was so early, I was ecstatic how fast we were going considering how anxious we had been beforehand so we divided the rest of the Area Five stickies between ourselves and got it out of the way. We then went to Area One where we met the rest of our friends and found out that we were finished. Finished ! Completely finished at 10.40am ! We were basically on an adrenaline rush at this stage since we realised that we were finished earlier than we had ever expected and had made well over 2000 stickies and had a ton of spares - it was an amazing feeling ! We spent the final twenty minutes sticking the post it's anywhere we could - some of our friends even put them in all the bathrooms - and also taking photos of our finished work and explaining the concept to people !

When the bell rang at break, the reaction was fantastic and more positive than any of us had anticipated ! There were people smiling everywhere and we heard several remark on how they wanted to go to both their normal and sports lockers to see what they got, one of our friends told us that she'd never seen so many people in the school smiling, one of our friends said it had brightened her sister's day, teachers told us that it was a brilliant idea, there were people sticking the stickies back up on lockers off the floor or sticking them all on one locker inside them and there were even people taking photos of the stickies everywhere ! We all couldn't believe how well the project had gone down with the majority of people, it was crazy ! Of course not everyone was going to like it and there were a lot of people complaining about the rubbish it would leave which unfortunately carried on throughout the day since we had written up on our poster explaining the concept that we would be cleaning all the mess up at lunch and any amount we could manage to get up during break too since a lot of our friends do ECDL and we didn't want to end up asking to take another class off but the message got back that it was thought we would be taking the rubbish up at break except we didn't know that so some classes ended up being taken out of class to clean up so I could understand why some students were annoyed, but it wasn't our plan although we were very thankful for people cleaning up even though it wasn't a mess they had made in the first place !

All in all, it was one of the happiest days I've ever had and it was such a brilliant feeling knowing that it had gone to plan and I can't thank my friends enough for getting involved - teamwork, yay ! Almost a week later, we can't stop smiling every time we walk by a locker that has two or three stickies inside and we still hear some of our classmates talk about the ones they've stuck inside.