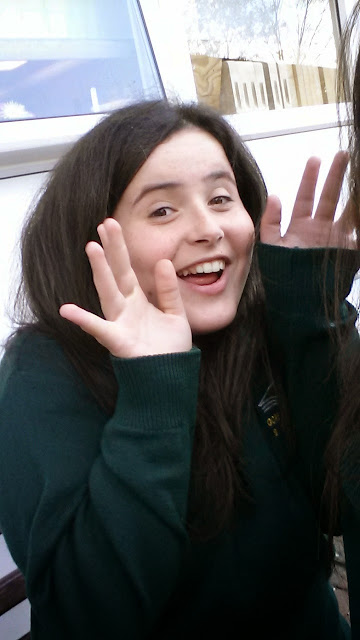 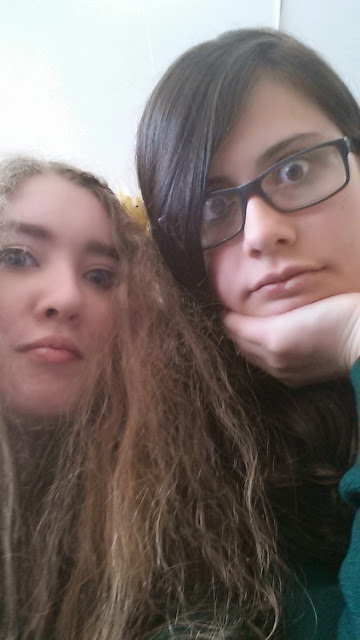 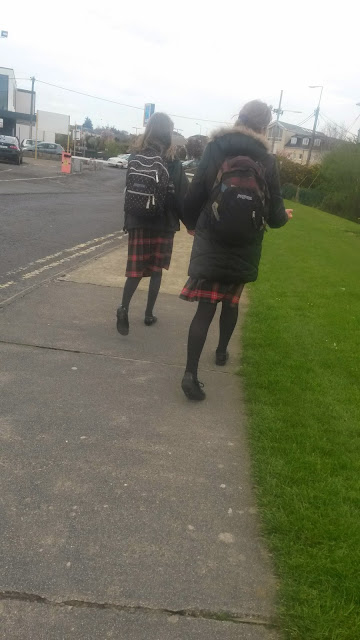 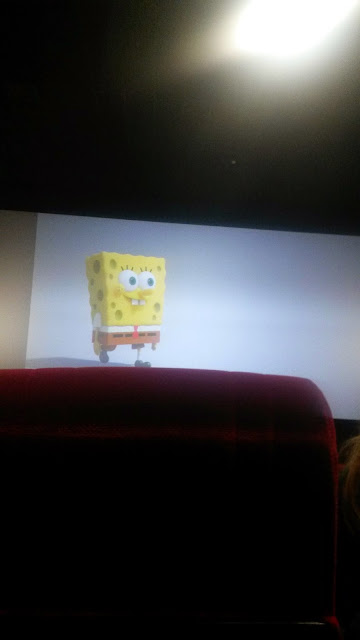 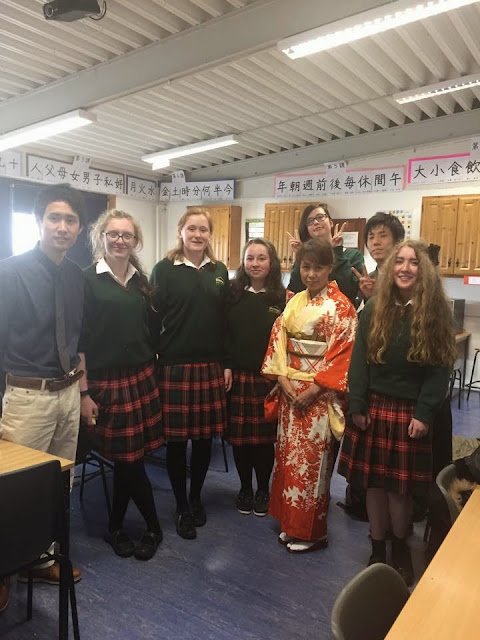 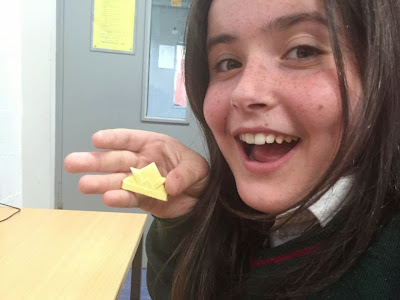 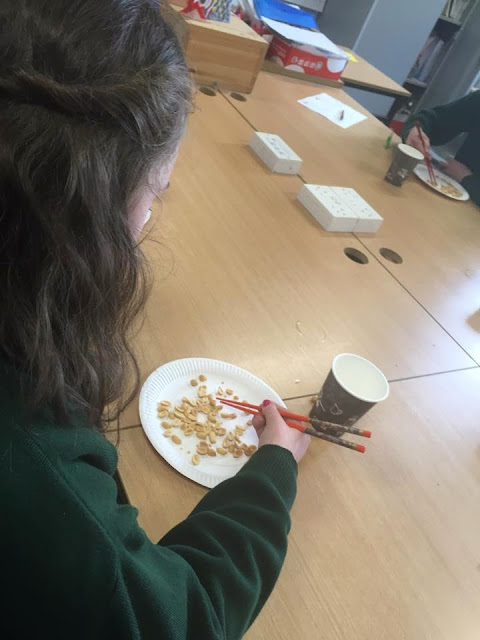 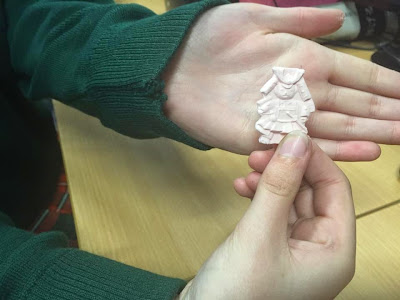 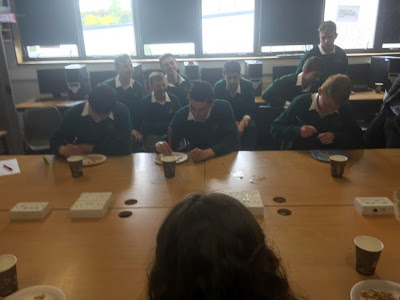 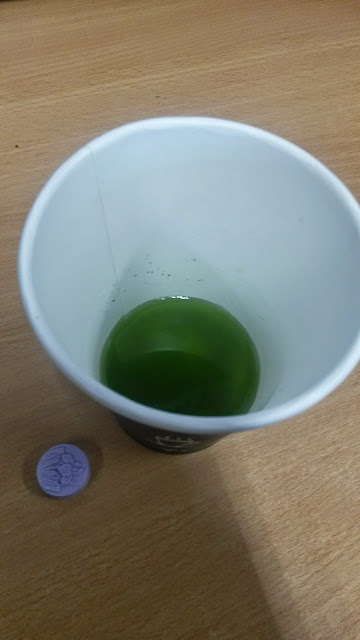 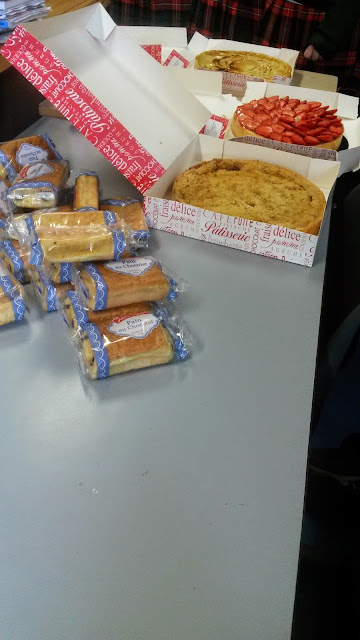 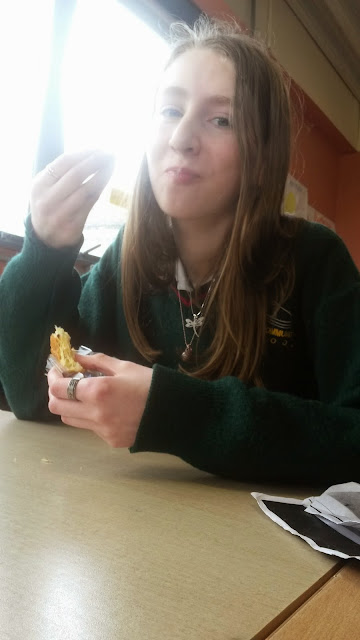 My favourite classes are languages and this year, you could say that I've been studying three - Irish, French and Japanese - which has been very enjoyable and a lot of fun, but since I don't want an extra stress or to have to drop any of the other optional subjects I love next year, I'm dropping French in order to do Japanese which I'm kind of sad about but at the same time, I really want to take the opportunity to study a language as unique as Japanese and I feel the stress of studying two foreign would take away the enjoyment of it !

So we've been doing a lot of fun things in language classes lately and first up was the cinema trip to see the Spongebob Squarepants movie as gaeilge last Friday. I was looking forward to the film as I'd heard there were a lot of puns in them and from previous experiences, watching films in a different language is always interesting to me, although I'm pretty sure the majority of the year were delighted to go regardless since we were missing three and half classes so I wouldn't disagree with them ! All week, everyone had been conflicted over whether there would be subtitles or not as the trip was compulsory and not everyone in our year studies Irish, but it was pretty clear thirty seconds into the film that there were not going to be any subtitles, whatsoever ! Personally, this didn't exactly bother me as I had a fairly good grasp of what they were saying although I still couldn't understand everything said word for word and those in attendance who don't study Irish weren't overly delighted since they were having to ask everyone around them about what was going on the whole time. Despite all this though, it was a great trip and the film was very funny !

On Tuesday in Japanese class, Ryoma the teaching assistant's mother and brother were visiting so they were in class and introduced themselves in Japanese which we translated to English on a worksheet. It was also Children's Day in Japan so we learned some more about their culture by making samurai soldier origami and trying green tea and powder sweets which you eat after taking the tea. Both were beautiful, especially the green tea which a lot of us were expecting to find bitter and not particularly tasty but my friends and I ended up surprising ourselves by enjoying it ! After this, chopsticks were taken out and we had a competition between both sides of the room to see who could pick up the most peanuts individually and place them in the paper cups. It was quite hilarious and I actually managed to pick up two peanuts which looked a fail and a half compared to some of my friends' cups filled with seven or eight cups ! Our side of the room was all girls except one boy and the other side was predominantly boys except one or two girls so the winners of the pretty fans and chopsticks ended up being the other side of the room and then our side of the room played rock, paper, scissors to compete for the remaining prizes. I really enjoyed this double class and I cannot wait for next Friday when both classes go to the restaurant for Japanese food !

Finally in French, our teacher had organised last week for everyone in our class to bring in a euro each for the double class on Wednesday. The money was gathered together and several people out of our class went to the French bakery // coffee shop up the street to buy food the class and they came back with an open apple tart, a strawberry tart, a rhubarb crumble and pain au chocolat ! Everyone got a slice of cake each and most of us also grabbed a pain au chocolat and all honesty, I don't think I have ever seen our class so quiet as it was whilst everyone was eating ! Barely anyone had touched the rhubarb crumble so a few of us nabbed a slice of that before the end of class and Aisling came in late to class following ToastMasters//MasterToast//being-a-speech-making-person so I gave her my pain au chocolat as I was already full after all the food I'd eaten ! It was a really fun double and it was also interesting to hear the history on the open apple tart.

Tomorrow, we're getting our portfolios back as well as interviews taking place and music practice so it's going to be a busy day and with hoodies arriving, making presentations, preparing for the end of year ceremony, tests, finishing touches to portfolio and the Japanese trip next week will be a busy one !