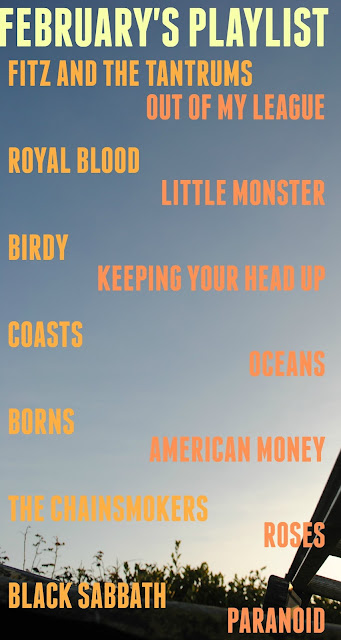 February has come to an end ! As always, I will thrown in the seven little words

I don't know where the month went

Up the chimney ? Down the sink ? Into my locker ? Hello February, where the heck have you disappeared to ?

As Februaries go, this one ended far better than the last few which was nice for a change. I'm not looking to jinx my luck but usually February concludes with me beginning to fall down a rabbit hole (Alice in Wonderland and a cheesy metaphor in one line ? Go me !) but this year, I'm not only leaving this month but also that rabbit hole that always seems to be less than happy to release me of it's clutches. My very deep mind doesn't like losing friends. Because of this sudden outlook in both positive mindset towards my surroundings and I, as well as spring, I wrote a little piece that is more upbeat than usual and therefore may be considered extremely cliche rather than extremely deep ! You can watch it here.

For the actual purpose of this post - monthly playlist ! I feel that every song that I listened to this month varied so much from the others were also frequently played - you would wonder how one goes from listening to Fitz and The Tantrums to Black Sabbath in less than twenty nine days but that apparently is the jist of a most people's music taste (not the actual artists but the genres.) ! My favourite songs from this month's playlist include American Money which was played over and over for two weeks - a song that has been recorded in so many different ways, at this stage it never becomes boring ! The uplifting beat and bloody amazing video of Keeping Your Head Up and also Roses, strangely enough, the type of music that I wouldn't usually be overly into but it is an amazing song ! The Chainsmokers are slowly convincing me to listen to EDM again ! Finally, I was searching random artists on YouTube when I came across Paranoid and I all of a sudden had the urge to do bad air guitar because I'd heard it somewhere before ... This led to me rewatching Skins Season 6 where I remembered that the song was in one of my favourites scenes ever from the show - Rich doing air guitar, etc. around the house to this song ! The scene's so much more upbeat than others in the final season of generation three - one that was quite grim as all final Skins seasons go - so that is probably why I love it so much.

March begins tomorrow ! What is this madness ?