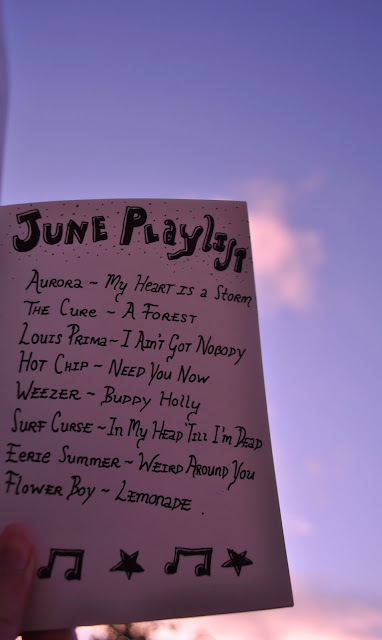 Another month coming to an end can only call for another monthly playlist ! This month's may not be as exciting for me to write as others but there are one or two that I will probably be a little over-enthusiastic to write several paragraphs about.

The first song is one that I debated over whether or not to include in last month's playlist (since I listened to it from the final day or two of May into the first two or three of June.) and that is ''My Heart Is A Storm'' by Aurora. This seems to be a pretty old song of Aurora's since it cannot be bought on iTunes and also, unlike a lot of her other songs, information on the origins of the lyrics (Some of Aurora's songs, such as 'Runaway', she wrote as a child !) doesn't seem to exist online either. I could spend all day arguing with myself over which Aurora song is my favourite but right now this is most definitely it. The percussion used in the song is so powerful as are the lyrics and its one of those songs where the harmony really completes the chorus and pre-chorus. All in all, a racing, uplifting song that you seriously need to listen to ! I forgot to add Drake's catchy "One Dance" and "School's Out" by Alice Cooper - the latter being the one that I started imitating the dancing in The Breakfast Club scene to when I finished my last summer exam.

Following that week, I spent the next week listening to "Forest" by The Cure which has the best guitar riff and "Need You Now" by Hot Chip - the deep female vocals of which make the entire song ! Because I cannot go a playlist post without going on a tangent about the music videos that go with these songs, I may add that both songs' music videos illustrate the songs' slightly eerie natures in a way, right down to the colours and brightness which again, thrilled me a little too much. I love jazz music so when I heard "I Ain't Got Nobody" playing in the background of a scene of the film 'Mystic Pizza', I raced to YouTube to look up the entire song. It's such a cheerful song - go look it up !

Then I went through a phase of listening to a lot of Weezer after finding this cover and that included ''Buddy Holly'' basically one of the coolest (my vocabulary here is weakening.) songs I've listened to - I don't know whether it's the riff or the monotonous lyrics - and once again, I'm in love with the music video, can it be made into an entire series or something ! I also listened to even more Surf Curse, this time "In My Head 'Till I'm Dead" and I'll spare you from having to listen to my further rambles about how great this band is. I've also been listening to ''Weird Around You'' by Eerie Summer - the lyrics of which being inspired by 'Daria' - and Flower Boy's "Lemonade" which is one of the most tranquil songs that I have found in ages and would sound even more beautiful with harmony !

What has been on your playlist this month ?