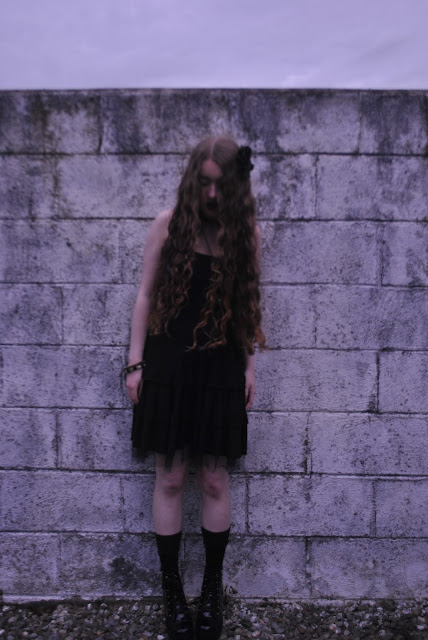 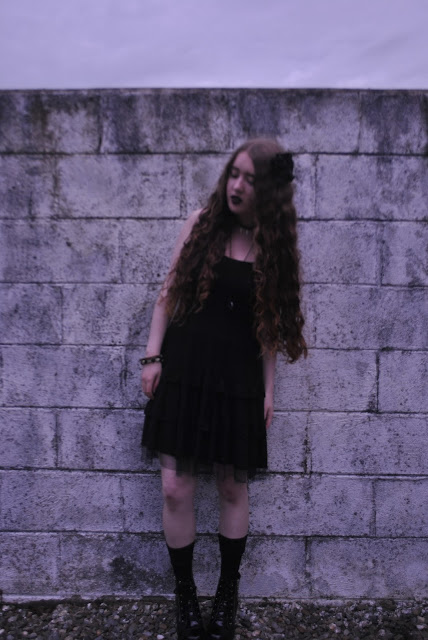 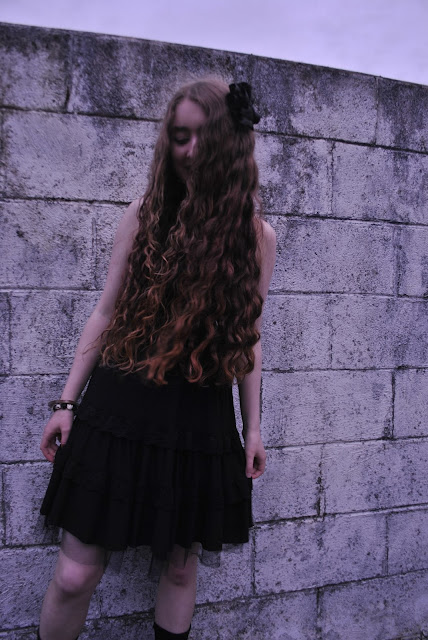 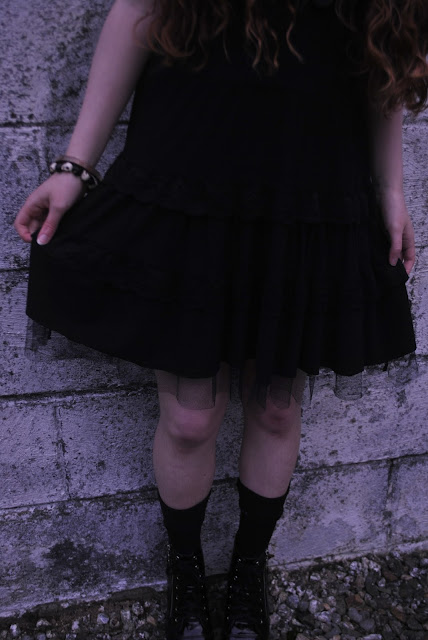 Greetings ! Last night was one of my best friends' eighteenth party which called for the last social outing before school returns - I haven't actually formally acknowledged this yet, I'm still perceiving Monday and Tuesday as another week - and delicious food ! My friends also tend to dress up on the rare occasion that we go out for a meal (generally some of the few times we see each other outside of school.) and every time, I tend to wear the same dress so I was adamant on finding a new dress to try out. I was beginning to accept that I'd throw something together (which would have, of course, been grand !) when on Friday, I finally found something in Oxfam ! And it was a euro, I repeat, a euro ! This amazing dress costed a euro ! The halterneck initially turned me off it, although I managed to hide it with my hair without any effort, but I am just so in love with the rest of the dress ! From the mesh ends to the lace detail, it is so beautiful ! Wearing it also marked another win for Grace over clothing fear since it was a little low-cut. I feel so uncomfortable wearing anything that is not high-necked - hence why the above photos are even more awkward than usual - but I ended up feeling so confident, it was brilliant ! Whilst we're on the topic of second-hand shops, I need to rave ! The past fortnight, I have also bought two DVDS (Easy A and Bend it Like Beckham.) for a euro each in a different charity shop and a film camera (pictured in my previous post.) for a fiver in a second-hand store !

Yesterday, I somehow managed to spend the afternoon at my friend's for Dungeons and Dragons and the evening at a restaurant for my friend's eighteenth without losing my head ! It was so nice to see a lot of my friends who I hadn't really seen all summer and the food was also insanely good, bar the fact that I always order pepperoni pizza, even though I don't have the appetite to finish it all on my own ! Compared to the majority of my friends, I have barely any photos from the night which I really regret ! I don't enjoy taking selfies in public. I feel really strange when either others or myself are doing so, which I know seems ironic considering I take so many photos of myself in outfits to write about on here, although even then, I'd prefer to be more like unidentifiable mannequin wearing the combinations ! Leaving the lack of photos aside, it was a brilliant evening and again, food. I will never become sick of fried calamari !